Everything you need to know about

Why it is important
Hazards
Types
Classification
How can we help

Hands are among the most injured body parts in Canada. Identifying hazards and developing safety measures, you and your employer can prevent your hands from being among the 500,000 injured in Canada every year.

According to the 2003 data, the most common types of injuries sustained at work are sprains and strains (49.9 per cent), followed by cuts, punctures or bites (19.2 per cent) and broken or fractured bones (8.7 per cent).

The majority of employees who suffered hand injuries were not wearing gloves at the time or were wearing the wrong type of glove. Backing this up, a recent Occupational Safety and Health Administration (OSHA) study found that 70.9 per cent of hand and arm injuries could have been prevented by using appropriate PPE — notably, safety gloves.

Heat and cold
Burns to the hands can be caused by exhaust pipes, sparks, steam, hot pipes, hot liquids, welding and molten metals. Even extreme cold can cause burns. Your hands and fingers turn numb at minus 15o C, which can increase the risk of accidents.

Chemical hazards
Chemical substances may irritate the skin, causing redness, itching, eczema, inflammation, dryness and serious burns. Some chemical products are doubly dangerous: in addition to being irritants, they are toxic when absorbed by the body through the skin. Degreasers, metals, plant and animal oils, dyes, inks, cleaning solutions and many other chemical products can damage the skin and subcutaneous tissues of your hands.

Risk of infection
‍Hands exposed to materials contaminated by microbes can become infected. For example, tetanus and hepatitis C are infections that can be transmitted through hand wounds. Check the date of your last tetanus immunization. Hepatitis C immunization is important for health care workers and laboratory workers

Against cuts, burns or punctures: Leather or canvas gloves were initially touted as a solution. Now, industry insiders say that cut-resistant gloves made of engineered yarns are the way to go.

Against chafing and abrasions: Fabric and coated fabric gloves are a solution for this.Against electrical hazards: Insulated rubber gloves are an optimal choice.

Against chemical hazards: Ideally, chemical- and liquid-resistant gloves would be the safest solution.

Against heat and cold: Aluminized fabrics of nylon, rayon, wool or glass gloves, ionizing radiations such as lead-lined gloves, or welding and rough surfaces like thick leather gloves.

Why this happened? As new materials, and technologies have come to market, the performance of protective gloves improved as well. However, the cut-resistance levels of the improved gloves haven’t been addressed until 2016.

With the new ANSI/ISEA 105-2016 there is a wider and more accurate range of cut-resistance performance levels for tested gloves. All of them will be tested by one specific ASTM method.

The new standard’s nine gradated cut level designations will allow users to see the shades of difference between the gloves in each level as opposed with the previous ANSI/ISEA standard (2005), when a single cut-level offered varying levels of performance. (see comparison chart below).

The new ANSI standard cut-level will now be identified as A1 through A9. New levels A4, A5, and A6 represent what used to be ANSI cut level 4. The new levels A5 through A9 together represent what was the old level 5. It’s also important to be aware of the grams of cut resistance you need, so no matter which standard your gloves have been rated by, you’ll have a better idea of the protection you’re getting. 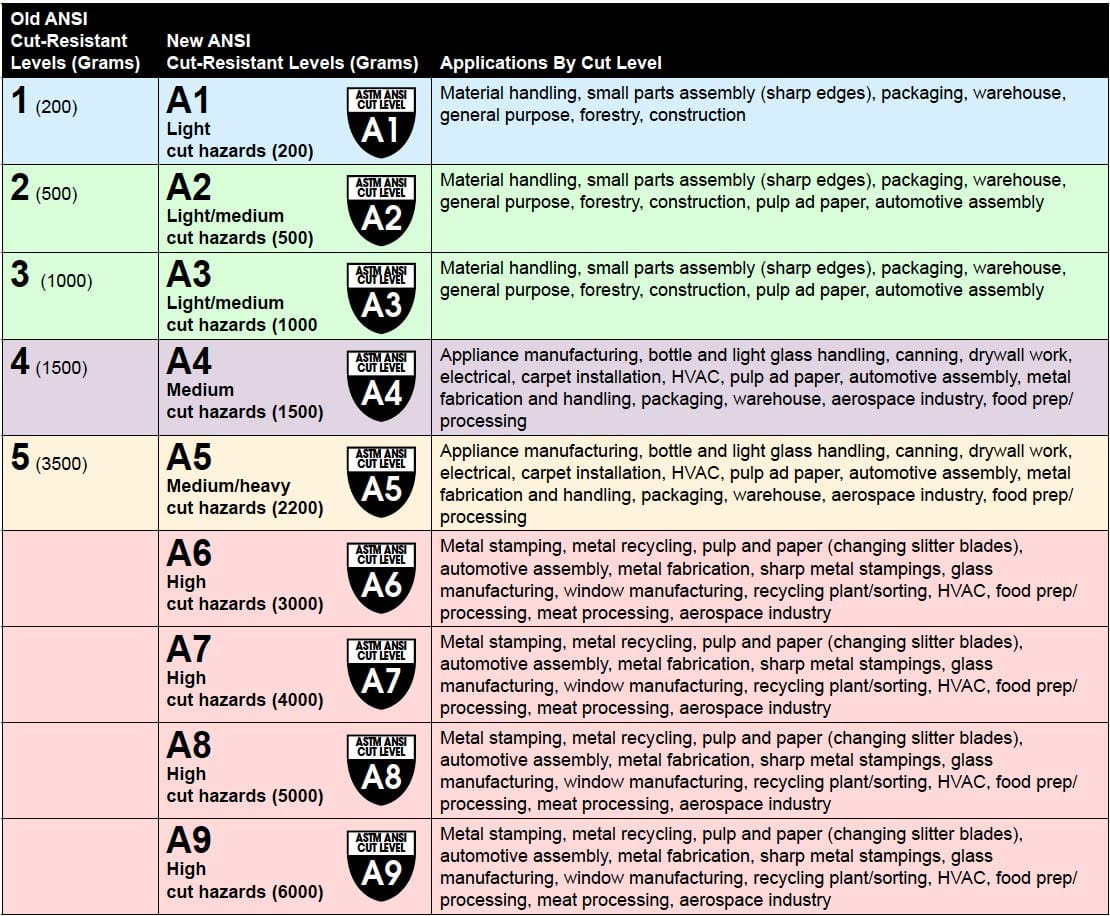 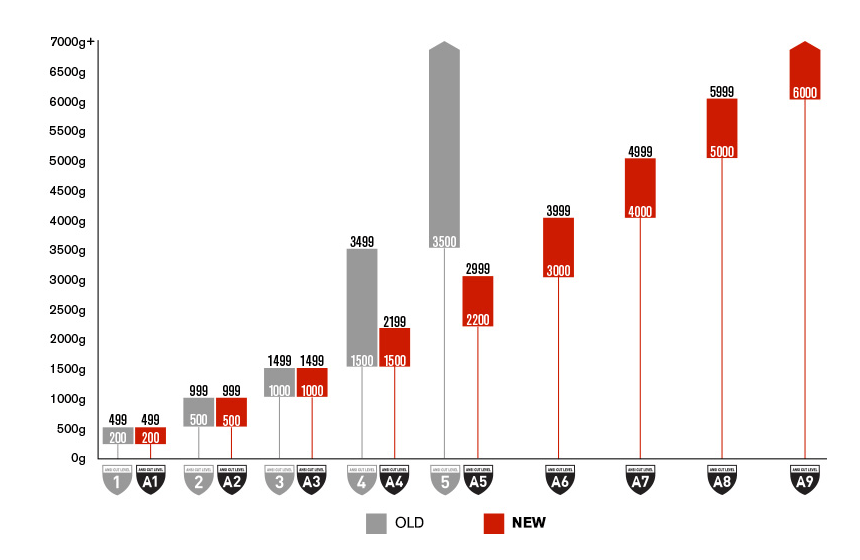 Goes in-depth and defines levels of impact using an impact-protection scale. The scale goes from 1-3, level 1 being applicable for people encountering less-probable impact, while level 3 is applicable for people encountering more impact in their workplace. An impact-resistant glove can have multiple numbers of the scale attributed to it, but the glove will be assigned with the lowest number.

The difference between levels is measured by Kilonewtons (kN) that can be seen in the table below. While the numeric value of kN goes down for each level, that doesn’t mean that the glove can take less force. It actually means the opposite. According to MCR Safety, “a lower recorded Peak Transmitted Force means more energy is absorbed by the glove’s back-of-hand-material.” With this in mind, the lower kN measurement for each performance level equates to a glove that is more safe from impact. 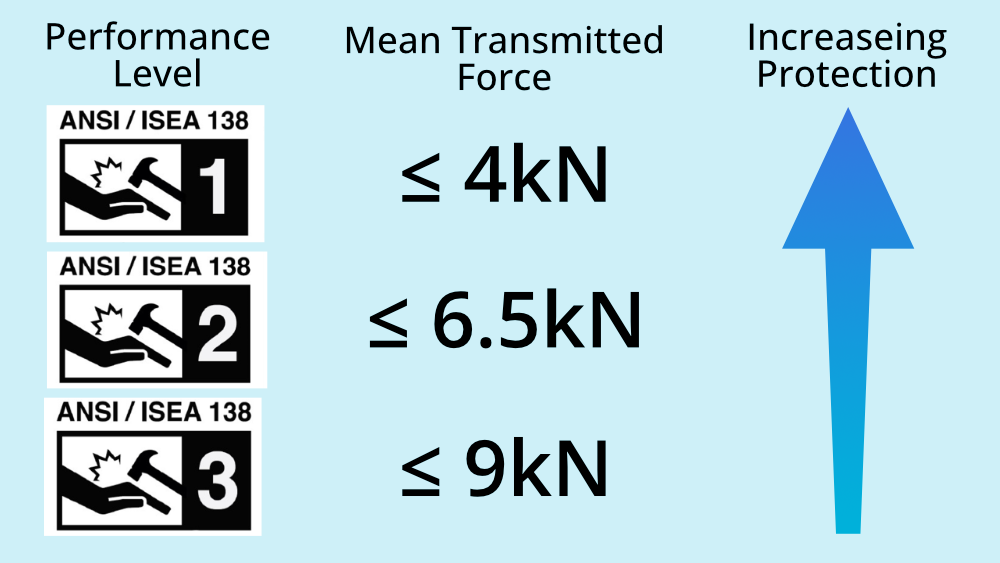 Puncture Resistance (Other Than Hypodermic Needle)

This puncture resistance testing measures how the glove will resist puncture by a blunt pointed object. When tested in accordance with the European Standard EN 388.2003, the glove’s resistance against puncture from a blunt probe is expressed as a Newton value. This is the force of the blade needed to cut through the glove material: 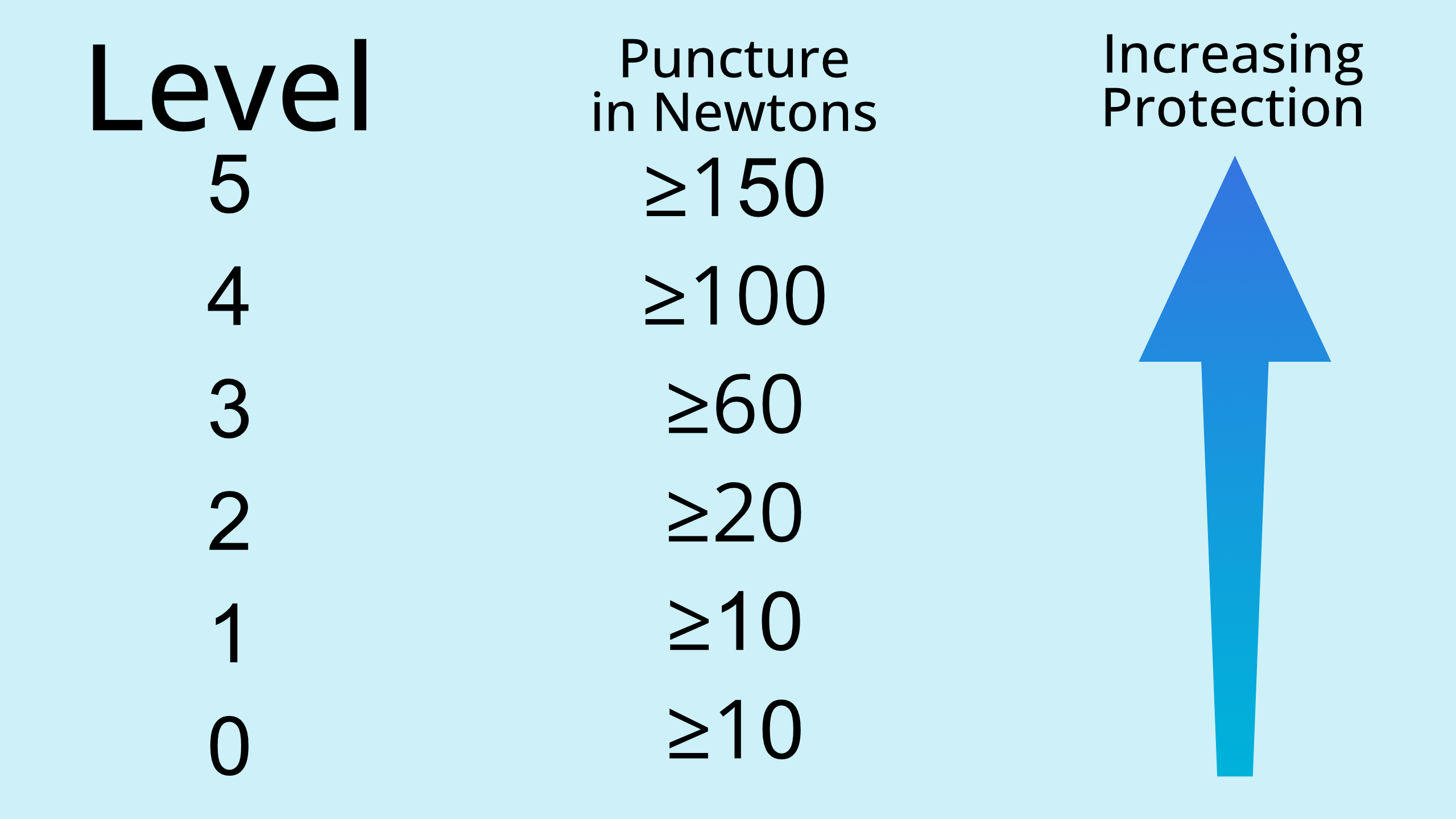 This puncture-resistance testing measures how well the glove resists puncture by a sharp-edged needle. When tested in accordance with ASTM F2878-10, the glove’s resistance against punctures from a hypodermic needle is classified as shown below, using the puncture force of a 25-gauge hypodermic needle: 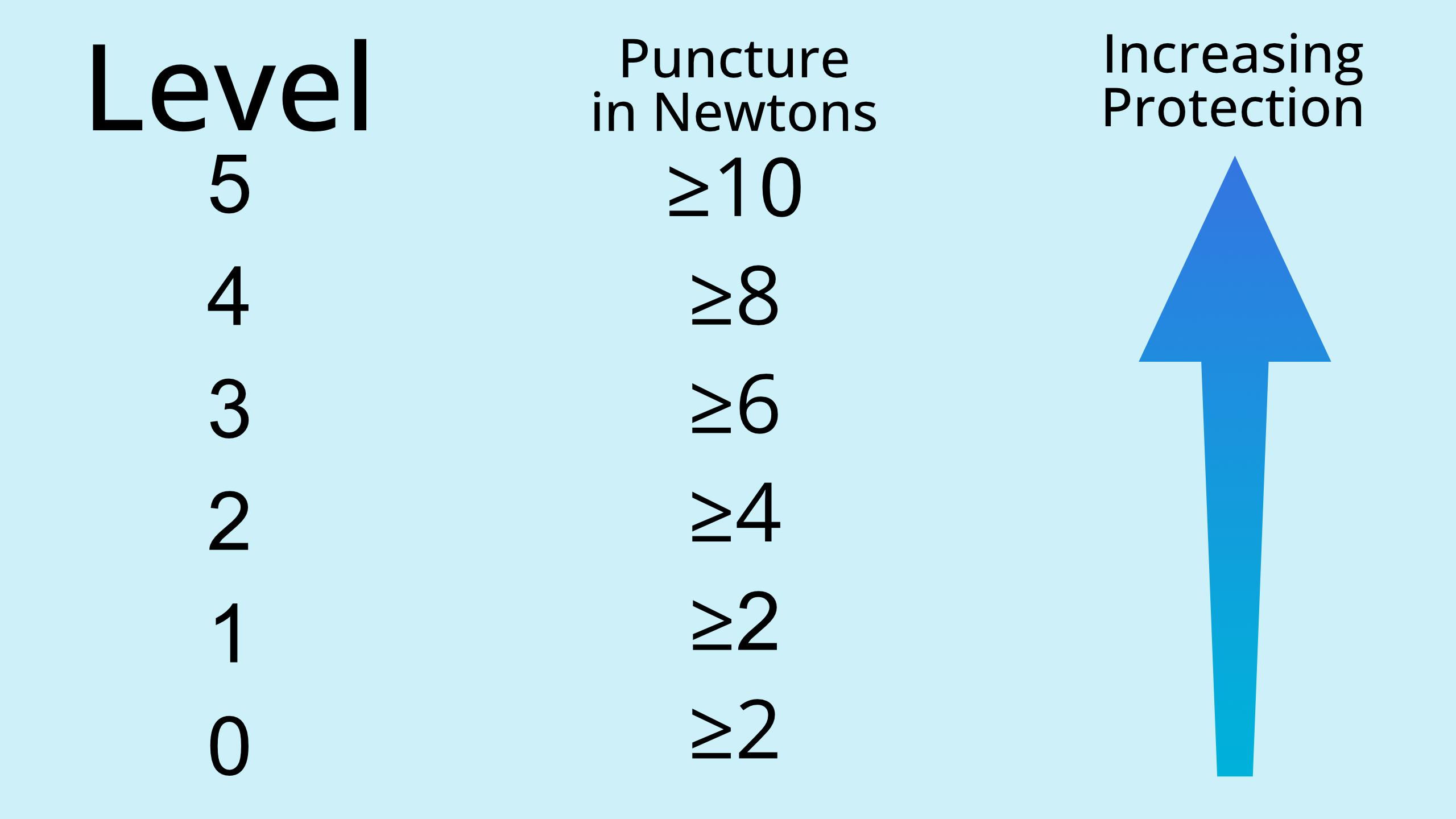 When tested in accordance with clause 6.2 of EN 420:2009, the dexterity of a glove is classified according to the levels shown below, using the smallest diameter of the pin that can be picked up: 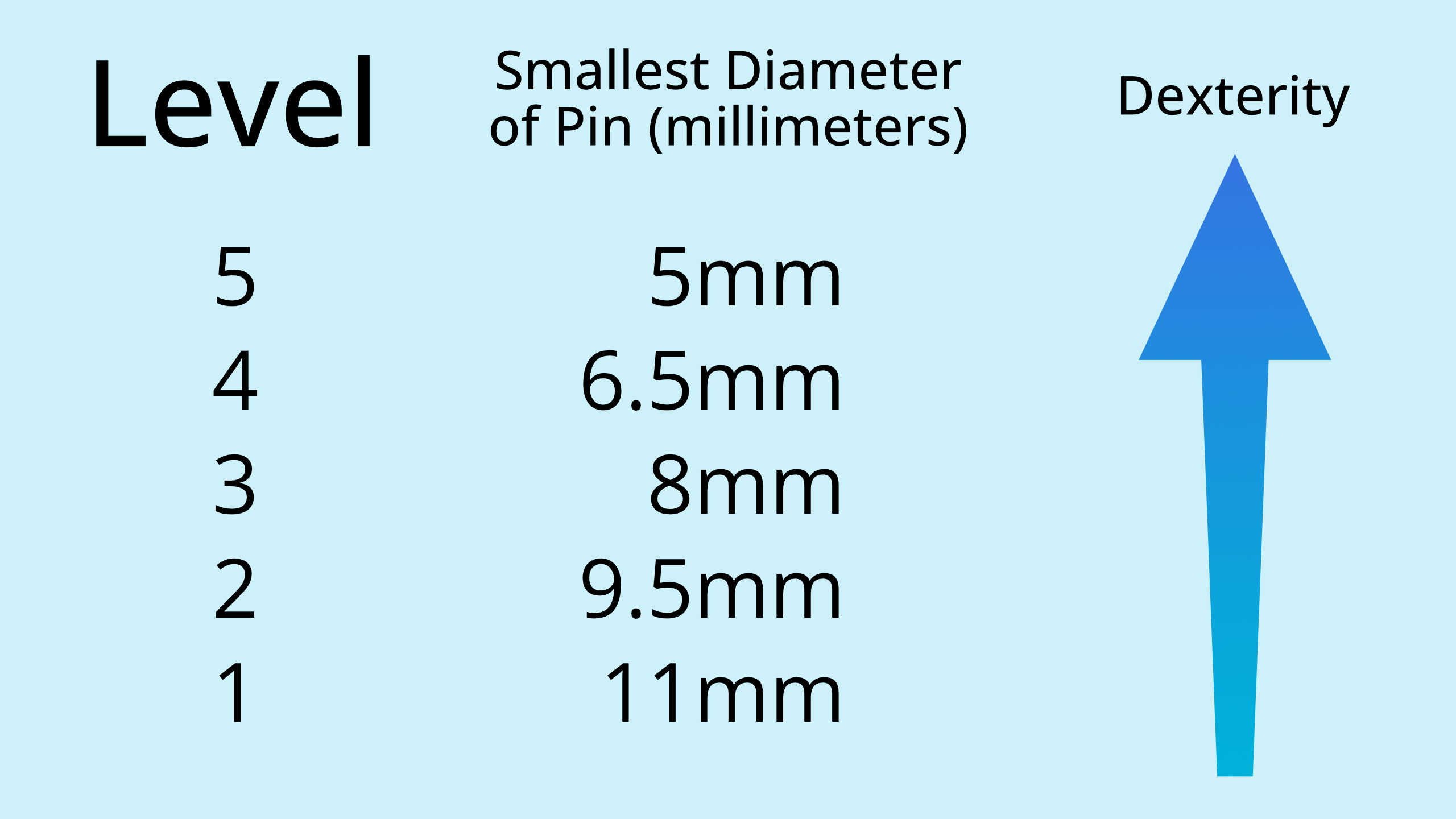 Abrasion resistance testing measures how well the glove resists loss of material from rubbing on rough surfaces. When tested in accordance with ASTM D3389-10 or ASTM D3884-09, the glove’s abrasion resistance is classified according to the following levels, using the number of abrasion cycles to failure: 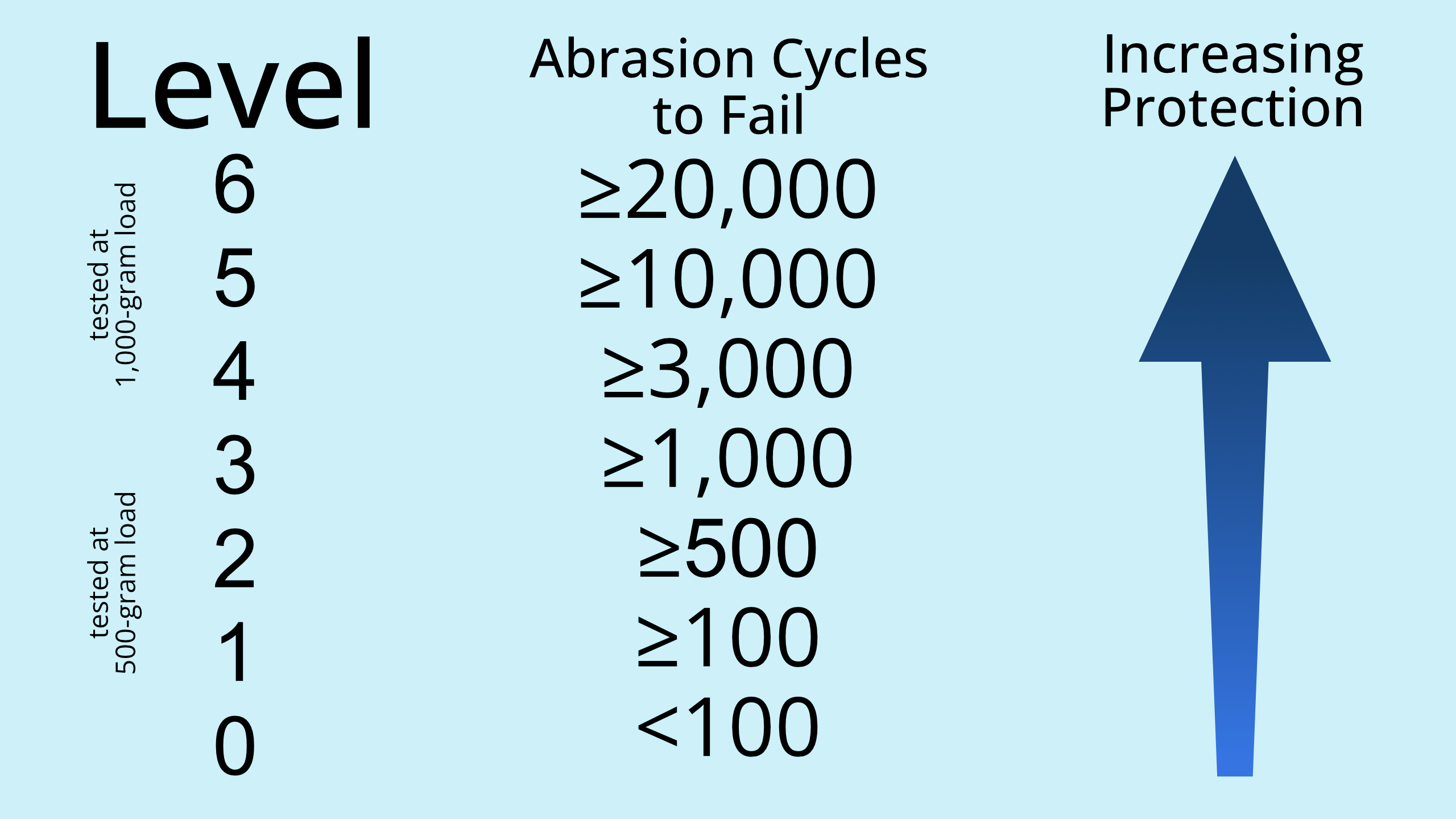 ASTM D3884-09 is used for uncoated gloves and the end point is the number of abrasion cycles when the first thread or yarn is broken.Larger numbers of cycles indicate greater abrasion resistance.

Permeation resistance testing measures the rate at which chemicals pass through the material on a molecular level. When tested in accordance with ASTM F739-12, the glove’s chemical permeation is classified according to the levels shown below, using the average standard breakthrough time (for each chemical tested): 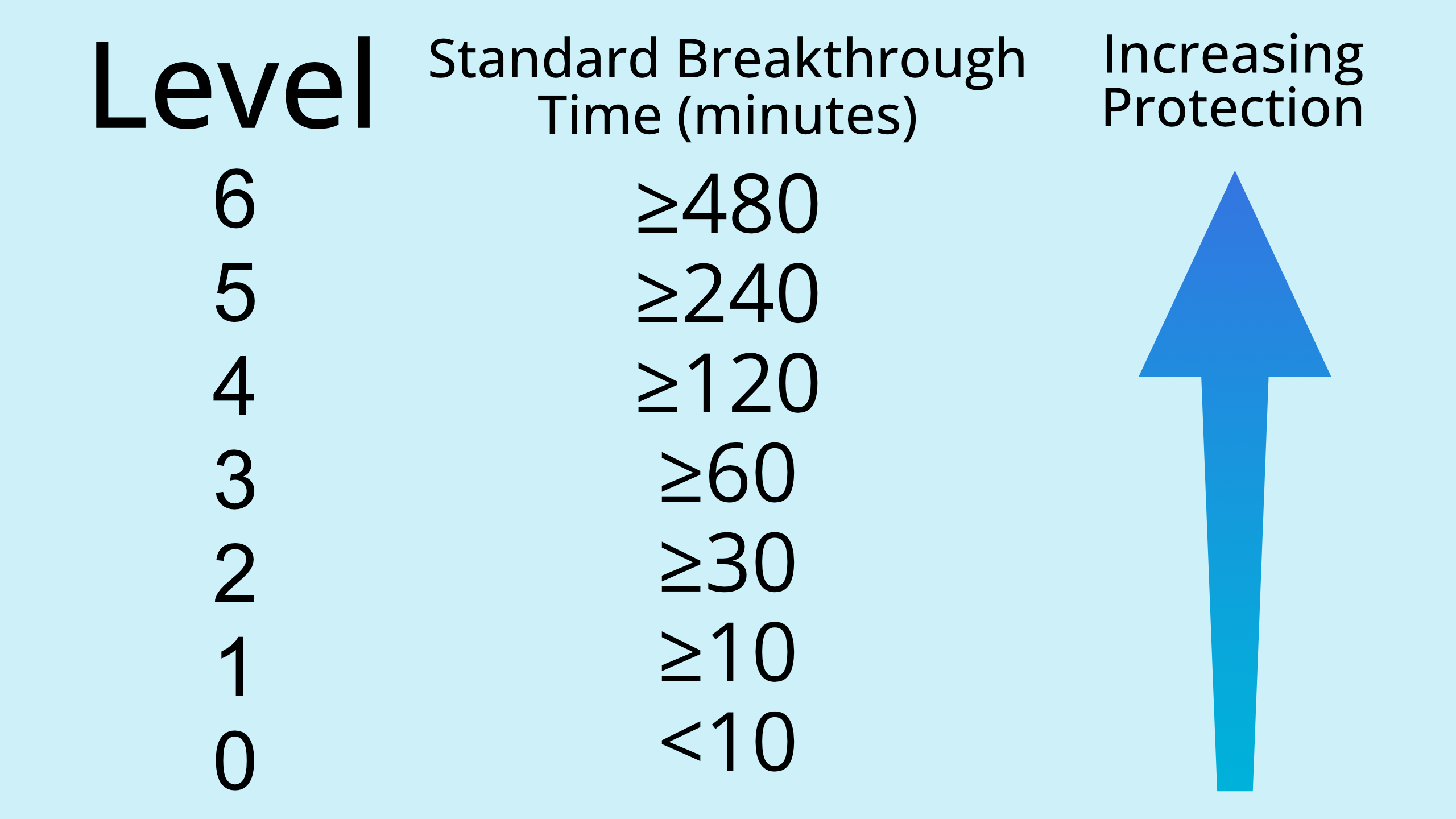 Degradation resistance testing measures the effects of a chemical on a glove. In this test, the measured effect is the loss of puncture resistance by percentage change. When tested in accordance with ANSI/ISEA 105-2016 Appendix B Test Method for Chemical Degradation Resistance, the chemical degradation is classified according to the levels outlined below: 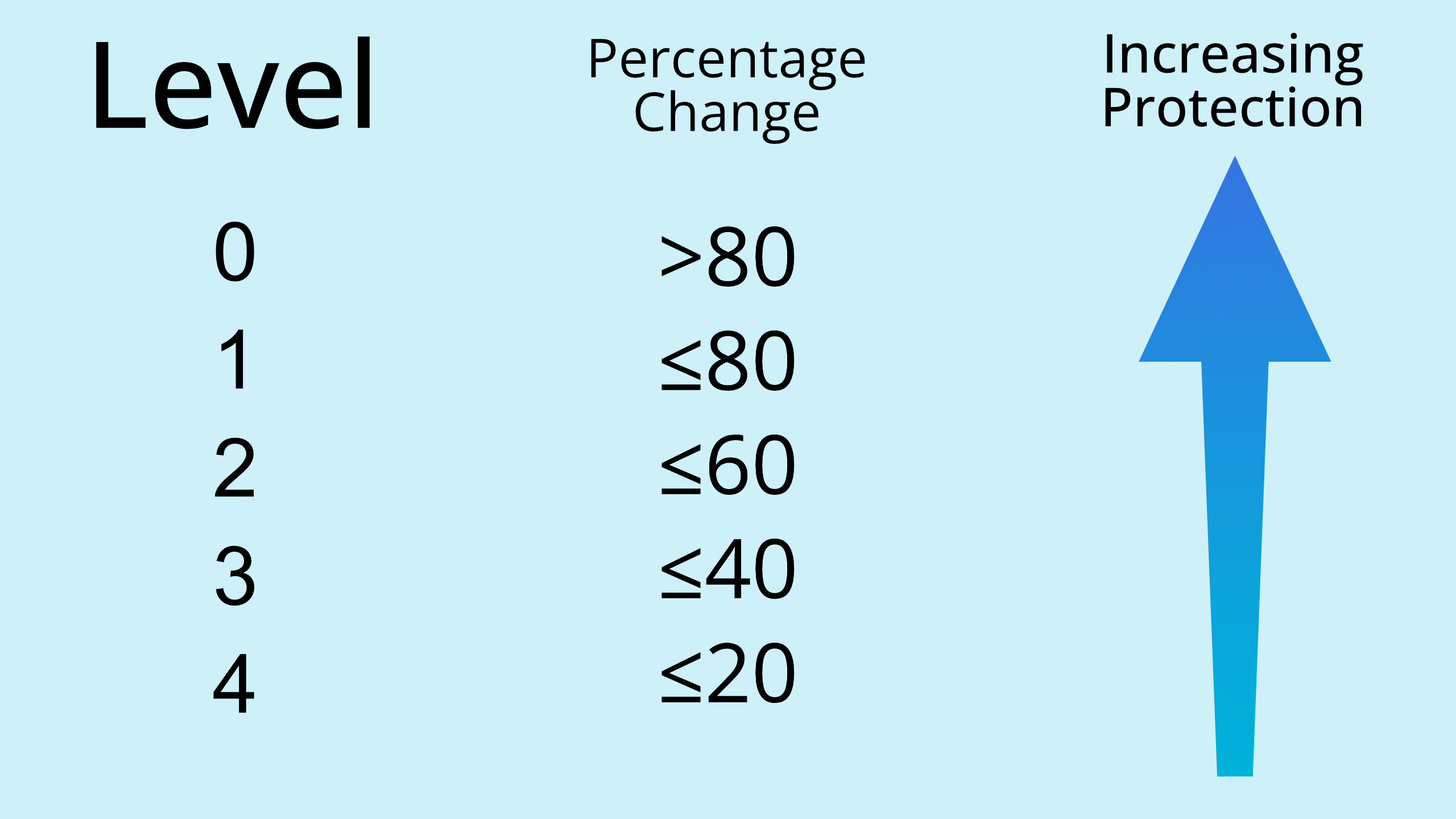 Ignition resistance and burning behavior testing measures how easily a glove will ignite, and if ignited, how readily it will continue to burn once the flame is removed. When tested in accordance with ASTM F 1358-08, the glove’s ignition resistance and burning behavior is classified according to the levels listed below. In order to be classified at a specific level, the glove material must meet each of the criteria at that specific level. 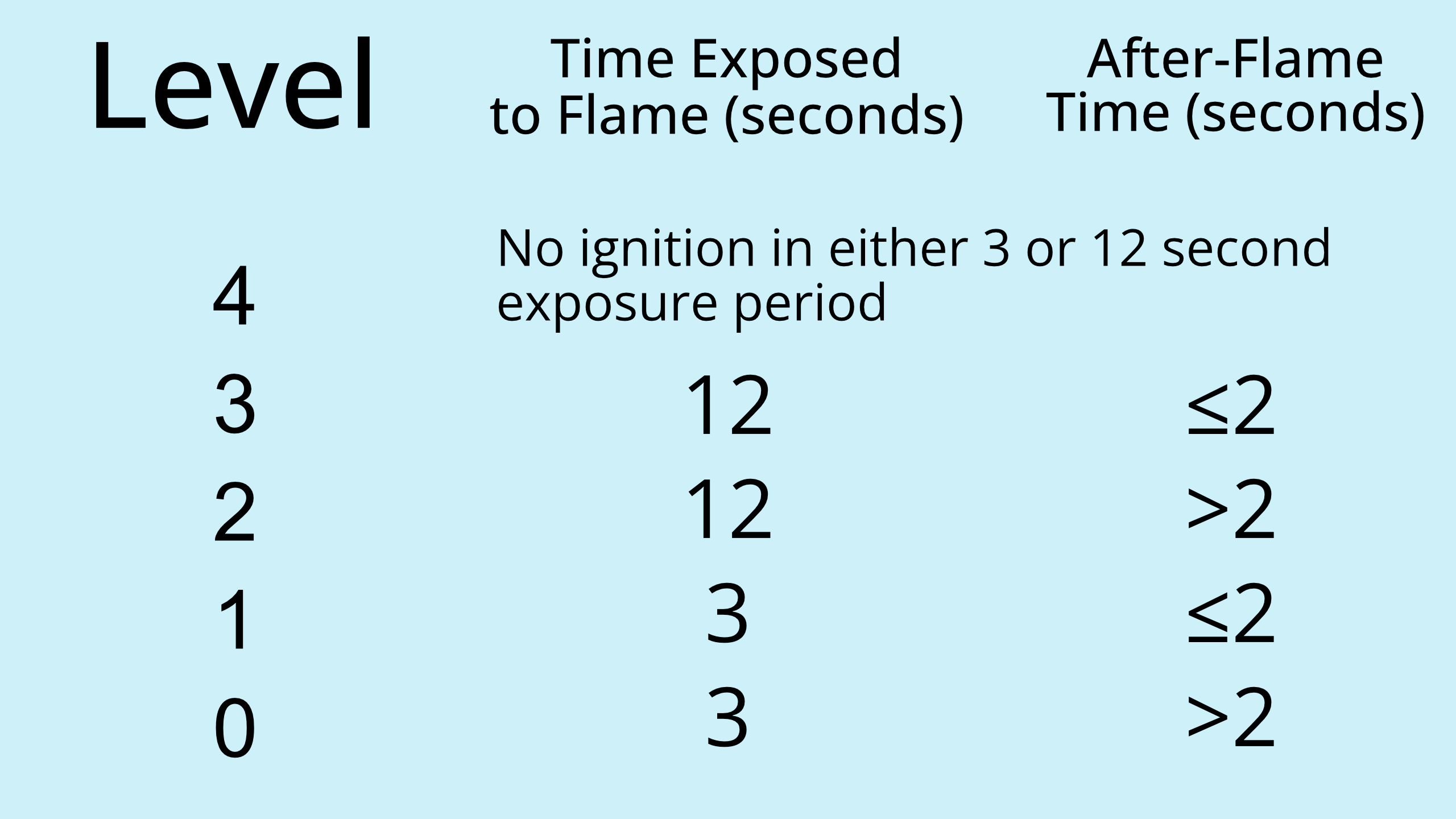 Materials that show no ignition or longer ignition times and short after-burn times are considered to perform better.

Heat degradation testing determines the exposure temperature at which a glove will show no significant heat degradation. When tested in accordance with the International Organization for Standardization ISO 17493:2000, the glove’s heat degradation resistance is classified according to the levels listed below: 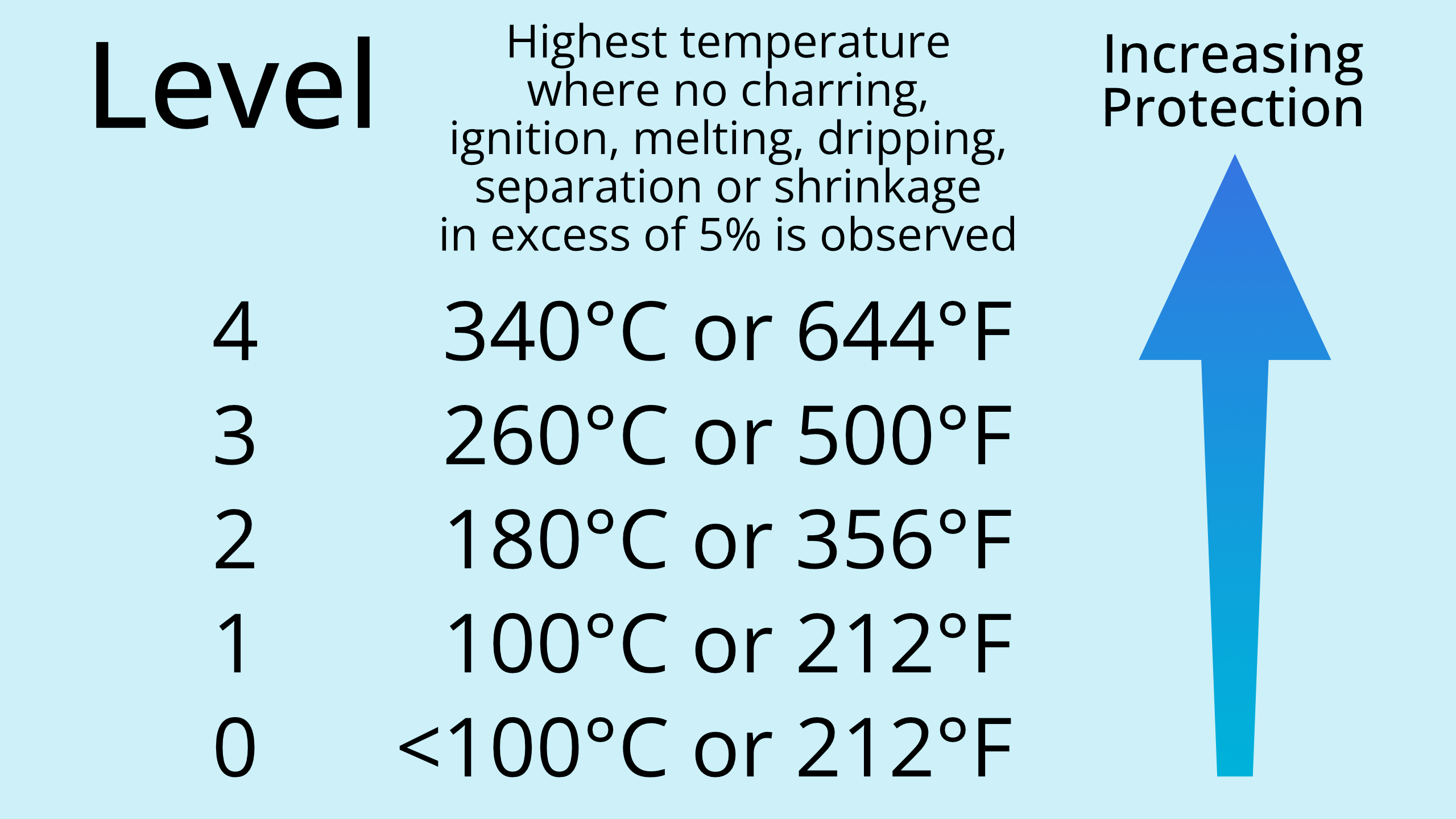 The higher the reported temperatures, the greater the heat degradation resistance.

Conductive heat resistance testing measures the insulation provided by the glove when exposed to and in contact with a hot surface. The ASTM F1060-08 test measures the time it takes a person wearing PPE to develop a second-degree burn when exposed to a certain temperature. Three aspects are taken into consideration:

The glove’s conductive heat resistance is measured according to the levels listed below: 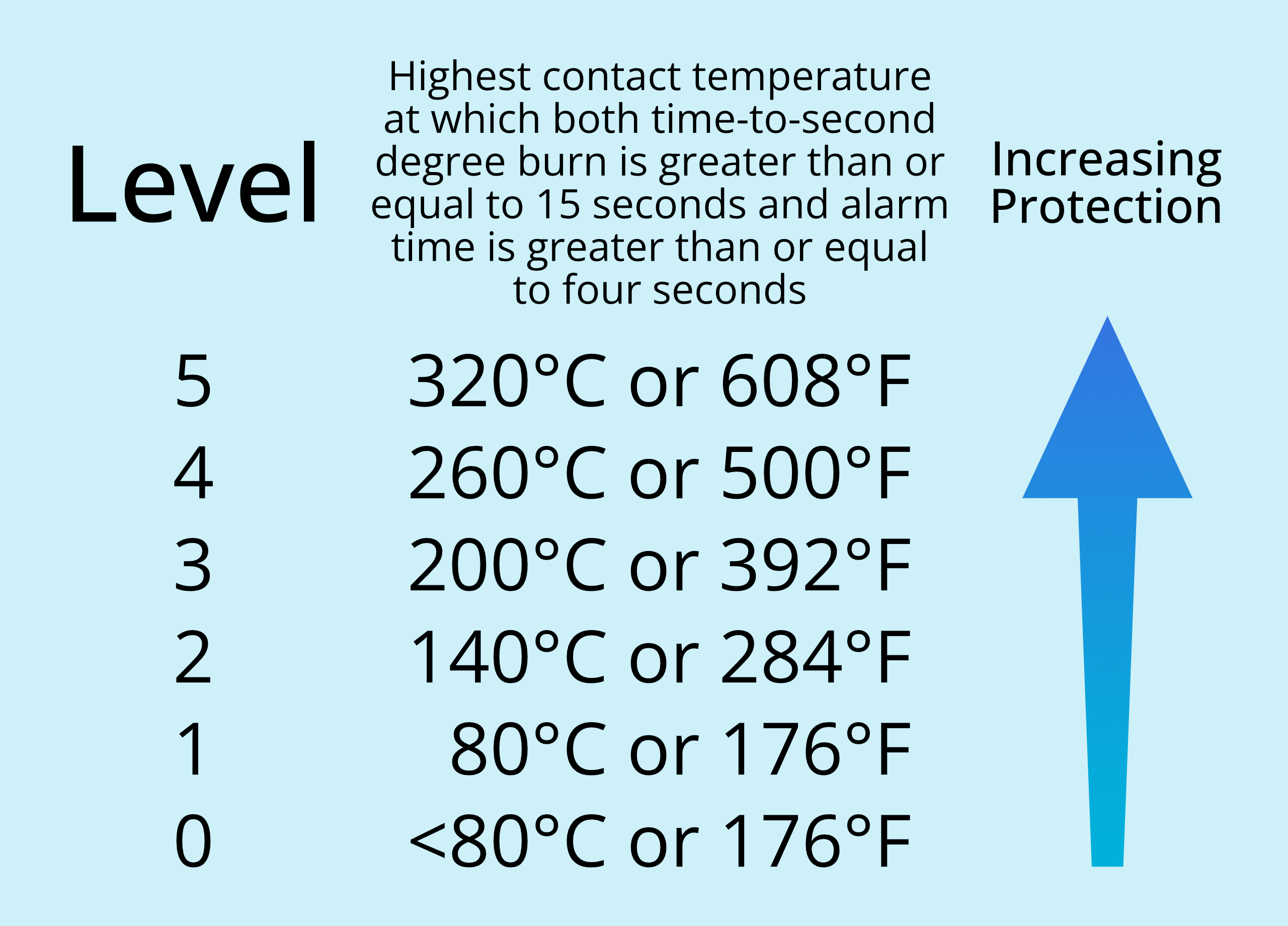 For instance, a glove with a Level 2 rating can withstand up to 140°C/284°F for at least 15 seconds before you are injured by a second-degree burn and at least 4 seconds of warning time where you can move away from the heat and avoid any burns.

When tested in accordance with ANSI S2.73-2002 (R2007), a glove’s vibration reduction is classified as pass or fail.
A glove must pass both of the following criteria:

Only full-fingered gloves are to be classified as “anti-vibration.”

We can help in different levels such as:

Thank you! Your submission has been received!
Oops! Something went wrong while submitting the form.